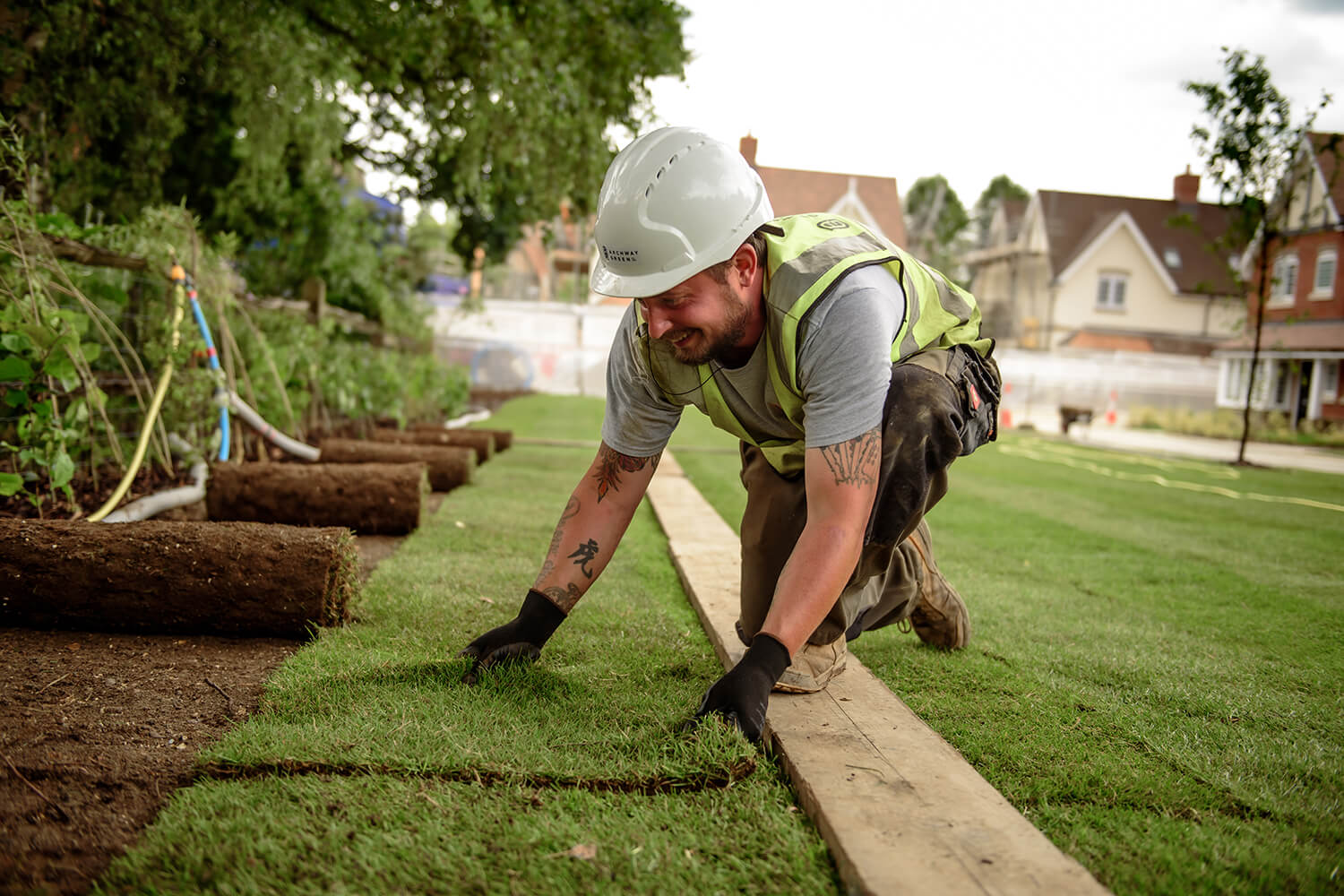 We are pleased to announce that Steve Lucas is now the Site Supervisor with responsbility for Quality Control at Archway Green.

Who is Steve and what does he do?

As of Tuesday 20 April, Steve Lucas has worked at Archway Green for 9 years, making him the longest-serving member of the team. Now Steve is turning his considerable expertise and experience to a new role within the company, as Senior Site Supervisor responsible for Quality Control.

A big part of Steve’s job is site visits: for pre-work checks to ensure everything is ready for an Archway landscaping team to arrive; for safeguarding and quality control while work is ongoing; and for advice and maintenance when work is complete. Steve also conducts regular inventories and audits to ensure that products meet the specification, and all necessary materials are available when required. On a typical day Steve is on the road a lot, and he spends a good deal of time liaising between site agents and team members carrying out the work. He’s also kept busy scheduling future work!

What makes Steve the right man for the job?

Steve’s first job was in a garden centre, where he originally applied for a retail position. As a condition of his hire, Steve studied for a HnD in Decorative and Amenity Horticulture, which has proved invaluable in his career. With units on Basic Garden Design and Botanical Studies under his belt, Steve understands the principles of landscaping design and is equipped to identify plant species, determine healthy specimens and ensure they receive the care they require. This comes in useful when unpacking a delivery, because if certain lines aren’t being delivered, ‘it’s important to recognise substitutes or unlabelled plants’.

Steve says it was his days in the garden centre which led him to realise how much he enjoys talking to people, another important part of his role. ‘I spent my days talking to elderly ladies with no false upselling, just casual conversation.’

The combination of his people skills and expertise means Steve is ideally placed to guide others and share his knowledge. This is particularly handy for the maintenance teams – Steve knows which plants require pruning, when and by how much. ‘Certain plants bleed if they’re cut in the heat,’ he says – but this and other problems can be avoided when Steve is on the case.

When asked why he thinks he suits the role and how his previous jobs have prepared him, Steve says, ‘It’s having built up experience through the years, taking on larger and larger projects – I can vocalise things to site agents, and explain what can and can’t be achieved to the guys on site.’

In his own words

What is your favourite thing about being Archway Green’s Site Supervisor?

Helping the lads out. They tend to come to me if they have issues or need help. I like to organise things, bouncing between different paths. Problem solving, that’s what it is.

My people skills – predominantly in liaising between teams and site agents. I can get a point across fairly but firmly – and I just like to talk!

What are your ambitions?

I’d like to get more involved with show gardens, as you have more creative freedom. I enjoy show house planting and instant impact planting because I like to work up a scheme and plant it how I think it should look.

Which plants do you enjoy working with most?

If you pushed me for an individual plant, I’d say Nandina domestica because it does something all year round. It has great foliage, berries for wildlife, and it can be very structural within a landscape.

What tips can you give operatives on site to check for quality?

Firstly, check the shape, size and height of the plant. Next, look at how damp the pot is. Often, containers are packed fairly dry to save on weight, so they need to be unpacked and watered instantly. Unpack everything immediately, not just as you need it – there’s nothing worse than a dry pot going into dry soil. Check for any broken limbs, especially on trees. Most can be pruned back, and due to commercial time constraints that’s preferable, but it depends on the break and the type of tree. We don’t want to have to plant a replacement in 6 months’ time.

An overlooked area is lawns – we’ve starting providing sprinklers and hoses as the aftercare is so important. They make such a difference to the appearance, but people often don’t realise how much maintenance they need.

Maintenance is important generally. Sometimes plants have problems in the first winter because, as an industry, we use a lot of plant stock from Europe – Italy, Holland and so on, where they don’t have such strong winters. To avoid the winter damage you either need to procure more hardy stock or inform the site and maintenance teams about how to prune plants back properly.

Also, matching the height specification for hedging and structural plants is crucial. People in the industry tend to focus on pot sizes, but sites have a height spec for instant impact.

What benefits can your role bring to Archway Green’s clients?

Keeping standards up, not only from our side but from the side of the client. And morale, too. The guys on site will hear about things that don’t go too well, but I can keep them aware of things that are looking good – a pat on the back is always appreciated. My aftercare visits mean clients understand how to maintain the work, and seeing the impact of their work after several weeks keeps the guys enthused to do a good job next time.

If you spoke to someone who’d never heard of Archway Green before, what would you want them to know?

Mainly how successful we’ve been over the last couple of years due to our quality, and how proud I’ve been to have been here since the beginning – from being on my own to having 15 two-man installation teams.